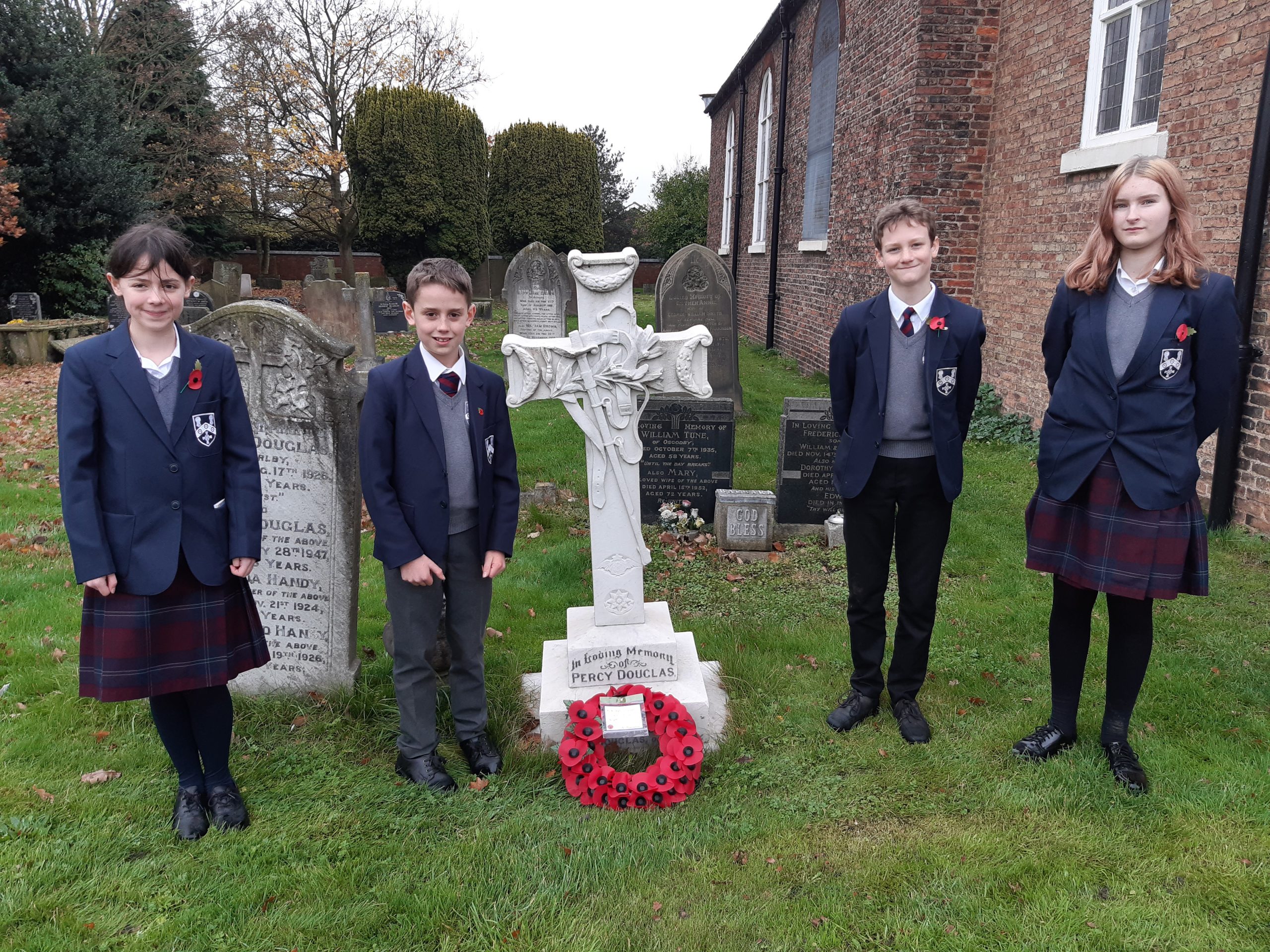 A small group of students from Barlby High School took part in a private act of remembrance this Armistice Day, visiting All Saints churchyard in Barlby to pay their respects to local men who enlisted in the First World War.

The four students – who are currently in the same year bubble – were accompanied by History teacher Louise Fillingham. She commented on the school’s long tradition of marking Armistice Day: “In any other year, we would normally attend services of remembrance at both Selby Cemetery and All Saints’ church, but this year has been very different due to COVID 19 restrictions. We therefore took the decision to stage our own scaled down act of remembrance having identified and conducted research into the lives of three men who had enlisted in the First World War.”

Students placed a wreath on the grave of Percy Douglas, a 2nd lieutenant in the 7th battalion, East Yorkshire regiment. Born in 1894 to Alfred and Sarah Douglas who lived at Mount Pleasant on York Road in Barlby. Percy Douglas signed up to Lord Kitchener’s army in 1914 and served in some of the most famous battles of the First World War, including the Battles of Albert, Delville (a series of engagements in the Battle of the Somme) and the first and second Battles of the Scarpe. In May 1916 his battalion were involved in the capture of the chemical works at Roeux – part of the Battle of Arras. It was likely here that he suffered the wounds which eventually killed him on May 25th 1917.

Students also visited the grave of Arthur Robinson of the 13th battalion, West Yorks Regiment (Prince of Wales’ own). Described in his war records as “honest, sober and willing”, the brown haired, blue eyed bricklayer from Howden Road enlisted in 1915 but was discharged from the army in 1917 having served in France. Described as having a “poor general condition”, Robinson would eventually die in 1919 of TB, which his medical records make clear was aggravated but not caused by the war.

However, the most tragic tale in All Saints’ graveyard, has to be that of William McCarthy, a driver in the 1st Coy, Army Service Corps. Records show that McCarthy was originally from Acton in Middlesex and joined the army at Shepherd’s Bush in 1916. He deserted not once, but twice and after been captured for the second time, was sent to Catterick under guard for his trial. It was on the Kings Cross to York express train that McCarthy jumped from the window of the carriage as it passed through Barlby. Medical records show that he survived for 30minues before eventually dying of concussion. The inquest into his death was held at the Old Schoolroom in Barlby, presided over by Mr Alf Douglas (the father of the Percy Douglas). After the inquest it was instructed “to arrange with a local undertaker to supply the coffin and hearse for the burial of the deceased, with the request to make the best economical arrangements possible”.

Commenting on their research, Louise Fillingham says “The stories of William, Arthur and Percy are all very different, yet each remind us of the devastating impact of war on individuals and their families. William McCarthy’s story is particularly tragic. By May 1916, the month of his death, the horrors of the Great War would have been widely known to people back home in England. The fear that drove him to commit these acts is completely understandable and a natural human response. Researching these stories has just added another layer of understanding to an already terrible event”. 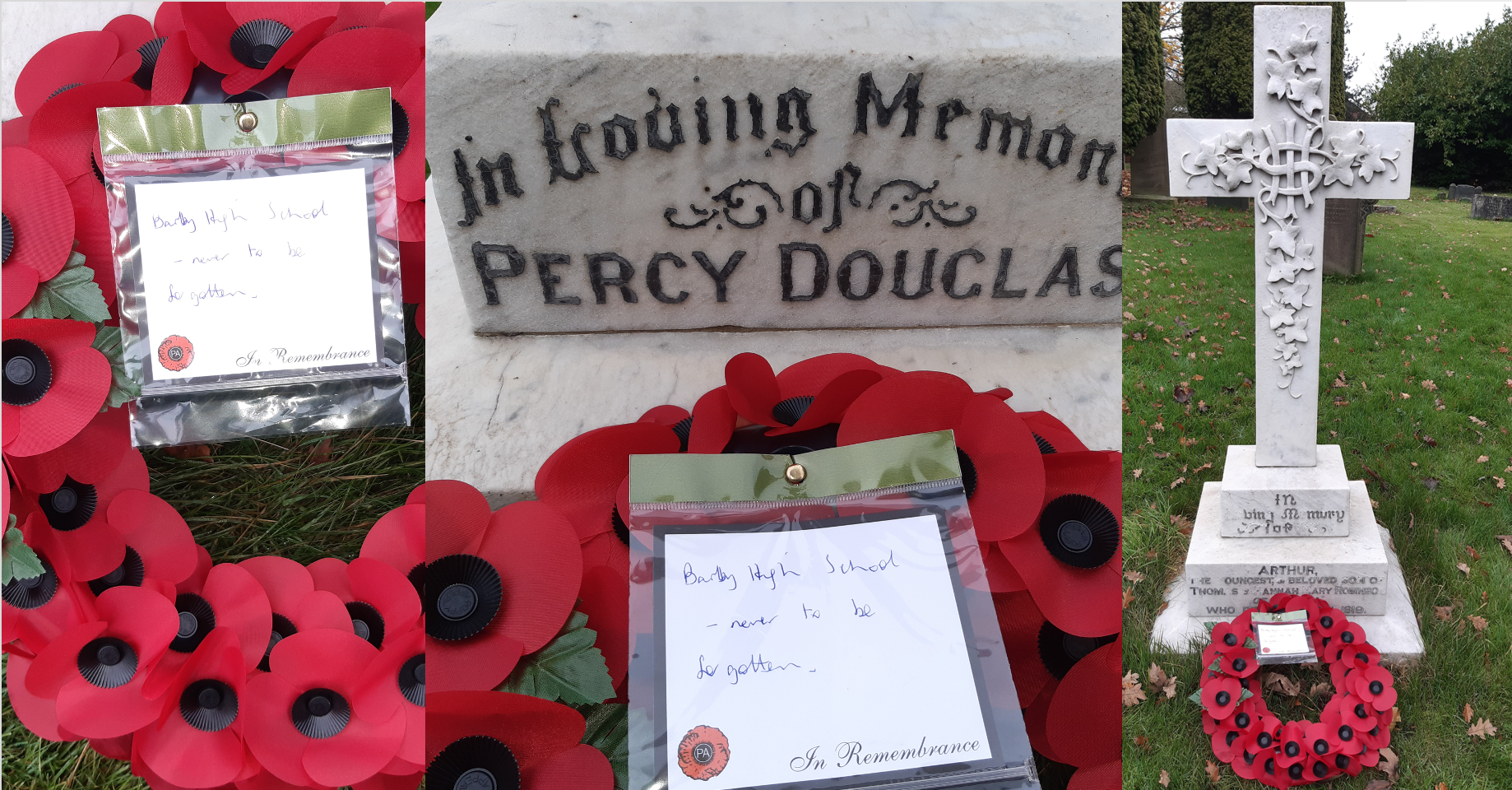