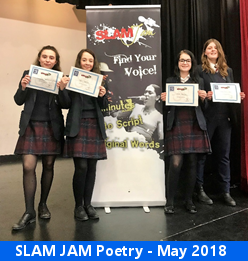 Mrs Wright and Mr Rinaldi were blown away this week by the incredible talents of our Y9 English students.
The Slam Jam Poetry Competition held heats in Doncaster on Wednesday evening and our students, Anna Vince, Lydia Guthrie, Fiona Carlton-Nichols and Aliesha Mapplebeck, were the only representatives from North Yorkshire. 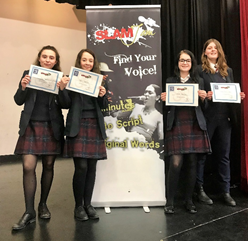 Despite stiff competition from other very talented students writers and performers, our girls swallowed their nerves and gave outstanding performances, delighting everyone with their skill of the spoken word.

Although we will not find out the results of who made it to the final competition in June, Anna and Lydia’s poem was voted second by the judging panel and are likely to go through to compete for the coveted title.

Fiona and Aliesha narrowly missed out on the top three podium, but still gained such an excellent score that they too may be successful in earning a place in the final. To get two teams through would make us the most successful school in the whole heat!

Well done to the girls for representing Barlby High School with such literary prowess.

Congratulations to all our Year 11 students who collected their #GCSE results today. It was lovely to see so many of you and hear about your exciting plans for the future. #GCSEResults2022 #newbeginnings bhs.hslt.academy/gcs…