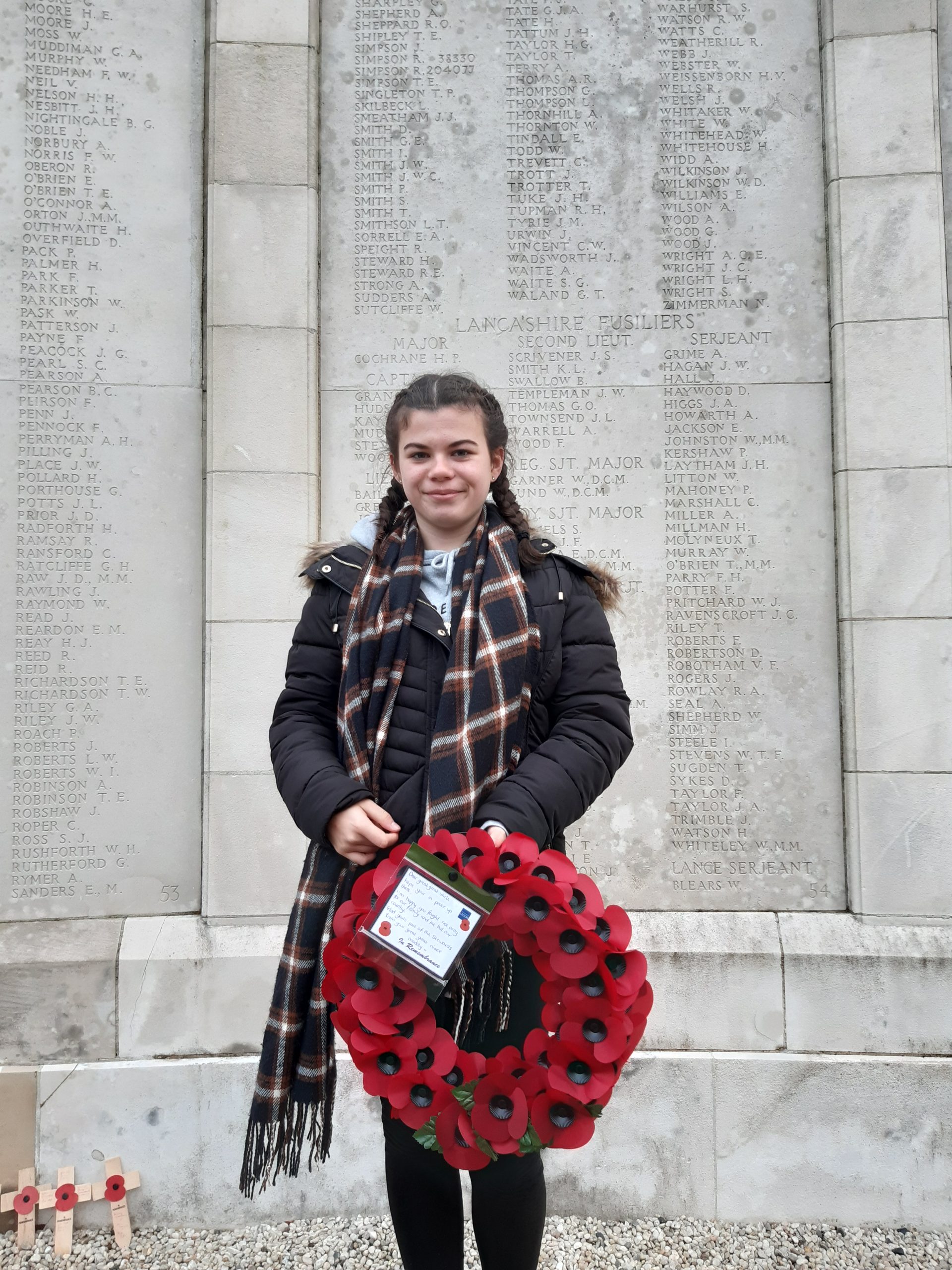 Year 8 students from Barlby High School have visited the battlefields of Ypres and honoured those who had made the “ultimate sacrifice” for their country.

For one student in particular, the experience was a family matter, as Maddy Steward paid her respects to Private Robert Edward Steward, her Great Great Uncle, killed in action in the Ypres Salient in 1917. It was only during a pre-trip information evening that Maddy realised that one of the local men they would be honouring during their two day visit, was actually a member of her family.

Born in Selby, Robert Steward joined the Yorkshire Regiment in 1914 at the age of 15, becoming one of the many thousands of “Teenage Tommies” who lied about their age to fight in the Great War. He went on to serve in the trenches of Ypres, and along the Messines Ridge. He later fought on the Somme in the Battle of Flers-Courcelette. In 1917 he was posted to the 6th battalion and served with them at Arras, in the Battle of Messines and then the Third Battle of Ypres – more commonly known as the Battle of Passchendaele. It was here that he was killed aged only 18. His body was never found and is now one of the 35,000 names featured on the Tyne Cot Memorial to the Missing.

During their visit to Tyne Cot Cemetery, students held a small ceremony for Robert Steward, where The Exhortation was read followed by a 2 minutes silence and the Kohima epitaph, ‘When you go home, Tell them of us and say, “For your tomorrow, We gave our today”’. It was at this point that Maddy laid a wreath on behalf of the family.

While at Tyne Cot, students also held a small ceremony for “an unknown soldier of the Great War”, with local cadet Alex Porteous laying a wreath on behalf of the school. At Lijssenthoek Military Cemetery, students honoured Private William Farley – a chorister from Selby Abbey – who was killed as a result of a gas attack on the Menin Road.

During the visit, students also visited Essex Farm, one of the most visited cemeteries in the Ypres Salient due to its association with John McCrae. Whilst stationed at Essex Farm, in May 1915 he was moved to write the famous poem “In Flanders Fields“, after one of his friends, Alexis Helmer, was killed and buried.

There was also the chance for students to experience life in the trenches at Hooge Crater, where they also got to handle artefacts such as shells from the First World War. They also visited Langemark German Cemetery and paid their respects to the soldiers from the German army who also made the ultimate sacrifice and who are now buried in mass graves.

The school also had the privilege of taking part in the Last Post Ceremony at the Menin Gate, which has been taking place every year and in all weathers since 1929 (with the exception of the four years of German occupation during WW2). Madalyn Hayes, Ella Pollitt and Charlotte Richardson had the great honour of laying the wreath on behalf of Barlby High School.